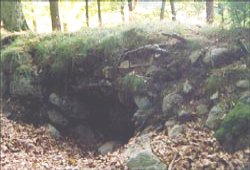 In Szklana Huta you may visit old burial sites discovered during archeological works in the 1970’s. Several dozens of box graves were found, three of which were unearthed. Inside the graves the archeologists found urns with human remains. Face urns are pear -shaped vessels with a smooth surface upon which faces are etched. The urns were covered with a bowl resembling a headgear. The archeological finds date back from the period when the pre-Slavonic people of the Pomeranian culture inhabited these terrains (iron age: 65- -125 B.C./. The urns may be viewed in the Museum of Archeology in Gdańsk. Similar grave barrows may be found in the area of Kopalino.