Choczewo Commune has its culinary traditions

Production, protection and promotion of high quality foods are playing more and more significant role in the EU countries. One of the basic ways of putting the quality policy into practice in the EU is marking with quality marks farm and food produce coming from specific regions and those characterised by traditional method of production.

In Poland, the responsibility for keeping the register of produce of specified geographical origin and specified traditional quality, as understood by the EU regulations, lies with the Ministry of Agriculture and Rural Development. The issue of entering dishes into the List of Traditional and Regional Produce is regulated by the Act concerning the registration and protection of names and marks of farm produce and food stuffs and traditional produce (Dz. U. 2005 Nr 10, item 68).

The List of Traditional and Regional Produce contains two dishes from our commune: “Duck in Pomeranian style” and “Pomeranian barrelled herring in sweet and sour marinade”. They are the first entries into the list from Wejherowo County. There are 29 entries altogether from Pomeranian Province (October 2006).

On 14th June 2006 “Duck in Pomeranian style” (Pomeranian Province) was entered into the List of Traditional and Regional Produce in the category: meat and meat produce. 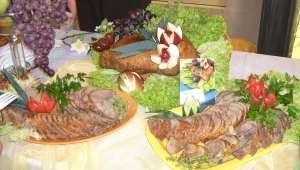 Shape (outward and in section)
Typical for poultry carcass after boning

Taste and smell
Smell typical for poultry roasted with the addition of herbs, unique, original taste.

“Duck in Pomeranian style” comes from the Kashubian area and is presently served in Pobrzeże Kaszubskie. For years the Kashubian people have grown mainly corn, potatoes, carrots, onions and parsley. In the past, not very fertile soil and capricious weather caused crops to be insufficient and the Kashubian people supplemented their poor diet with eggs, dishes made from flour, buckwheat, whereas potatoes in different forms were added to all meals. On Sundays and holidays meat dishes were served. These were prepared from poultry kept on Kashubian farms and among these were ducks. Domestic duck (Anas domestica) has been one of the most valued domestic birds for over 2500 years now. Romans, for instance, were very fond of dishes made from ducks and they had their own technique of breeding and fattening them. They even thought that duck’s meat had healing properties. Plutarch, for instance, claimed in all seriousness that Katon’s family and servants were saved from the plague, which at that time was spreading in Rome, thanks to a great number of ducks consumed by them. However, there is no correlation between the two facts from the scientific point of view.

Domestic duck comes from mallard, which was domesticated about 2500 years ago. At present, ducks are bred on a large scale on breeding farms but also on small farms to satisfy farmers’ needs and in both cases they are bred mainly for their tasty meat and feathers. Duck is second most often bred bird in the Pomeranian area, goose taking first place. Duck, tough heavy to digest, is very tasty. It’s perfect for roasting.

Duck roasted in apples, served especially in autumn, is considered by some to be a Polish national dish. There are also variations of the dish such as duck in oranges or peaches and duck with potato, veal or buckwheat stuffing. Duck in Pomeranian style is filled with pork as this meat is more popular than veal in the Kashubian area. It has a long tradition . For over ninety years it has been made according to an old traditional recipe, used by successive generations. Duck in Pomeranian style is served during  holiday season and at celebration parties. While roasting in a roasting tin, fat ducks should be watered generously to let them roast in their own fat after water evaporates. Duck roasted this way is delicious and aromatic. The dish may be served either hot as dinner or cold. Boning the duck before roasting makes it is easy to carve. It can be cut into even thin slices. The  meat is tender, juicy and tasty and the fact that it received a number of awards and diplomas can  be viewed as nothing but the proof of its uniqueness.

The dish was entered into the List thanks to Mrs Zacharewicz, a resident of Słajszewo.

On 4th September 2006, “Pomeranian barrelled herring in sweet and sour marinade”
(Pomeranian Province) was entered into the List of Traditional and Regional Produce in thecategory: fishery produce, including fish. 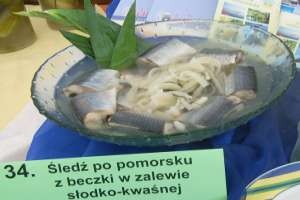 Herring has always been consumed in the Pomeranian region because of its nutritional and taste as well as the closeness of the sea. In his book, “Culinary Traditions of Regions” (2006), M. Woźniczko states that Kashubian and Pomeranian cuisine, just like the local countryside, is diverse and distinctive. Fish, prepared in a variety of ways, is in the lead and the dishes made from fish are tasty and have lots of nutritional value. The main saltwater fish used is herring(…) The sea and fish originally provided the basis of living for local people. According to H. Lewandowski ( “Promotion of Culinary Culture in Tradition and Customs”, 2006) fishery in Pomorze Gdańskie has been known for ages. It has been favoured by natural conditions such as closeness of the sea coast, numerous lakes and rivers rich in different kinds of fish. These conditions made fishery, apart from farming, the most important source of income for a number of people in the area. Some people decided to settle near water and, in time, established a group of professional fishermen. In Pomorze Gdańskie, the most important was (and still is) fishery done for living by the Kashubian people living on the Hel peninsula, in coastal villages or on the Bay of Gdańsk as well as on some bigger lakes of southern Kashubian region. As farming conditions in this region were difficult, fishery became the primary activity for a large group of people, determining the standard of living for social groups and even chores in farms revolved around fishery. The chores were done by both men and women. Children helped too. However, it was men who went fishing to sea. On the Hel peninsula and in the coastal villages special organizations, called maszoperie, were established, grouping fishermen from particular villages in order to fish together. It comes as no surprise that in the villages where fishery was the primary source of income fish was one of the substantial elements of diet. Being perishable, fish had to be well kept and preserved. Herring can be served in a variety of ways and on different occasions. In the past, to be preserved, fish was dried, smoked and salted. Sometimes fish was salted and carefully put into barrels, clay pots or stoneware vessels. Lots of salted herring was eaten during the Lent, duly observed by church goers. Liked by many, herring was one of the few foodstuffs that were bought in town. (H. Lewandowski, 2006) According to tradition, Pomeranian barrelled herring in sweet and sour marinade is served on Christmas Eve.

The dish was entered into the List thanks to Mrs Kramek, a resident of Sasino.

The descriptions of the dishes come from the Ministry of Agriculture and Rural Development website.