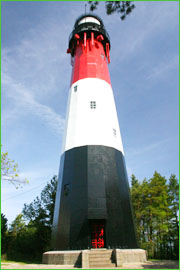 The lighthouse was built by the Germans on the concrete and white granite foundation. It was assembled from ready cast steel elements fixed with screws. There are only three such structures in the world, two of which are situated in Europe.

Originally the lighthouse had gas lighting- burner, mirrors and prisms. Later, the gas burner was replaced by incandescent lighting- incandescent light of 2500W, mirrors and prisms. For the past 15 years the lighthouse has been using halogen lights with the power of light beam from 1200W/12V, powered from the grid. In case of power failure, there is a standby power generator and 6 batteries of 100A/h each, i.e. 18-hour reserve. The lights are switched on by a photocell or traditionally- manually. In the past, there was also a sound signal with the full sound cycle of 30s. which was audible within 6-12 miles during fog.

After radars had been introduced on fishing boats, the sound signal was eliminated from navigational system.

The last German lighthouse keeper, Mr P. Pruztt, was in charge of the lighthouse until 1945. In 1948 the lighthouse was taken over by Mr Stefan Łozicki, a very colourful person. He was honoured with the Cross of Valour after the battle of Monte Cassino. He was the radio operator of the tank which pushed into a precipice another tank blocking the way during the final attack. He worked in the lighthouse for 33 years.

For many years the lighthouse was also operated by Jan Liss and Longin Godula. After Stefan Łozicki had stopped working, the operation of the lighthouse was taken over by his son, Romuald Łozicki, who is still working there with his wife, Weronika.

There are 18 lighthouses along the Polish coastline, 17 of which are operative. The lighthouses fall into two categories: lighthouses and radio beacons. Some of them function as both.

The lighthouse keeper is mainly responsible for operation of the lighthouse and the maintenance of other buildings connected with it. However, one very important responsibility that the lighthouse keeper finds among his duties is radio monitoring of the connection between ships and the coastal station on emergency channel. Any information about a situation at sea is given to the main station, which sends SAR teams if necessary. In 1970, a Danish ship went aground at Stilo after her engines had failed to work. There was a storm with the wind reaching force 12 on the Beaufort scale. The lighthouse personnel took part in a rescue operation of the ship and its crew via the radio.

Year 2006 is the year of commemoration of the 100th anniversary of the Stilo Lighthouse.